Seven emirates, one destination: Exploring the United Arab Emirates will give you the chance to discover a land plentiful in history and culture. Catch a tour to the desert and explore the wild side of Arabia. Relax your mind, body, and soul at the exclusive resorts. Find your escape in the UAE. 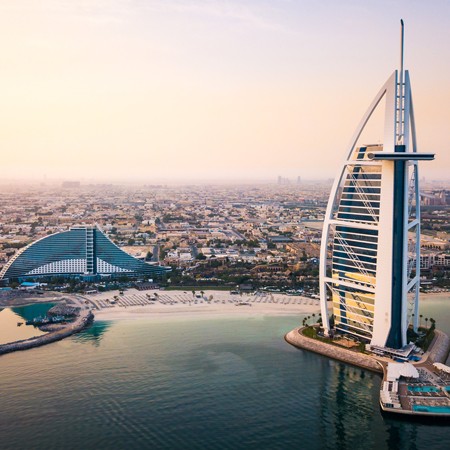 One of the most spectacular places on Earth, this once little sheikhdom baking under the sun, grew to be today's magnificent, most glamorous, most magical world destination! Nowhere in the Gulf region (or anywhere else, really) can people admire astounding engineering feats as evinced in the world's tallest building, Burj Khalifa. Another one of its architectural icons, the famous Burj Al Arab Hotel. Besides, stroll along with verdant parks and grand boulevards lined with fine restaurants, posh boutiques, and gigantic, state-of-the-art malls (there's one where you can ski in! Yes! Snow in 40 degrees sun!).

Dubai's main artery is the Sheikh Zaid Road with all its ultra-modern, high-rise steel and glass left and right, then there's the Dubai Marina, with so much of Hong Kong and Monaco combined. But not all are steel and drink in this spectacularly futuristic city: Dubai is also home to bustling old-fashioned souks and picturesque Arab neighborhoods, strangely contrasting with a backdrop of eclectic skyscrapers, towering office buildings, and hotels all coupled with sheer extravagance and ultra-modern, ultra-cool sights and sounds. As it is by the sea, Dubai is also a forerunner of sea building—World Islands are a series of villas build over huge artificial islands shaped into the world's continents...What else can this say?! Ah, and they didn't forget the beaches and resorts—visit Atlantis, the country's largest. Nearly every avenue in Dubai is strewn with trees shadowed by neck-tilting towers, high-end hotels, trendy shops, hip cafes, and theatres, all of which lend Dubai a first-class, cosmopolitan status in the world of travel. Speaking of which, Dubai International Airport is a landmark in itself—millions and millions land every year, many to shop in its duty-free! An incredible journey!! And more so if you step into Emirates, the sheikhdom's national airline of unsurpassed international fame. In short, Dubai is just pure gold, chillaxing, and feeling that you want the best of this world somewhere far. 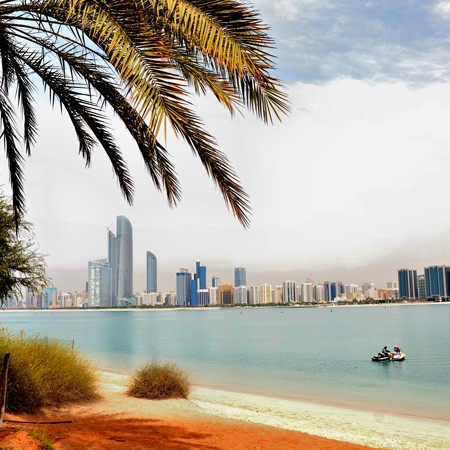 Just over an hour's drive along the coast is the capital, Abu Dhabi. Though a little was less flashy than its frivolous, more renowned neighbor, the city is generally calmer but not short of alluring sites like the Emirates Palace Hotel and, believe or not, the Abu Dhabi Louvre. Yes! Even Parisians could soon be flocking to see the alter ego of their famous museum. 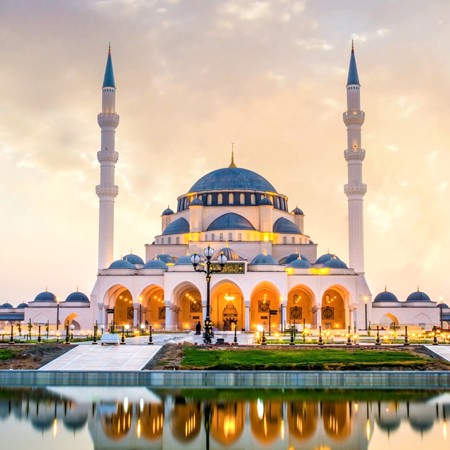 More conservative is this constituent emirate, which, having opted out of its neighbors' lavishness, had instead decided to be the bastion of traditional culture—something to make up for the vast importation of steel, glass, and vibe. Sharjah is host to dozens of museums dedicated to the local culture and religion, as the impressive Museum of Islamic Civilization. 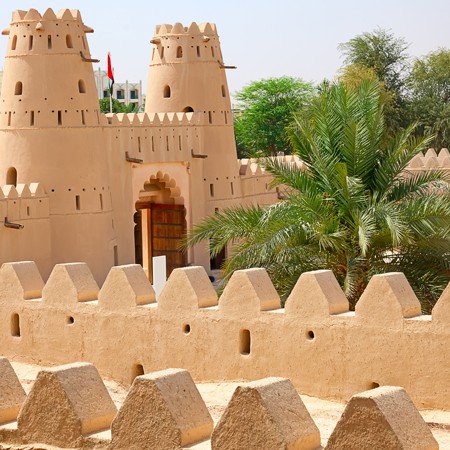 Sleepier than its three sisters is the even more traditional emirate of Al-Ain, with its mud-brick forts, old-fashioned souks, and a string of out-of-a-movie oases. A short drive farther east is the coast, offering virtually untouched beautiful beaches set against the Hajar Mountains.

Best things to do in United Arab Emirates

The Burj Khalifa is one of the United Arab Emirates' most prominent buildings and the soaring sky-high landmark of Dubai. Rising 828m high, the Burj Khalifa is the tallest building globally. You will be able to enjoy panoramic views across Dubai and hub activities for the whole family.

Louvre Abu Dhabi is a cultural beacon, bringing diverse cultures together to shine fresh light on humanity's yielded stories. Whether you're engaged in early history, the tremendous Empirical ages, or modern art, you'll find the museum exhibits fascinating. Simultaneously, the building's abrupt and ultra-modern architecture draws visitors in itself.

The powerful and inspiring Sheikh Zayed Grand Mosque is one of the world's biggest mosques and the only one that apprehends the unique synergies between Islam and other world cultures. Sheikh Zayed bin Sultan Al Nahyan, the Founder of the UAE, had a particular vision for this mosque: to incorporate architectural styles from different Muslim cultures and celebrate cultural diversity by creating a genuinely welcoming haven encouraging its foundation.

From the city beaches along the coast of Dubai, with their high-rise history, and Abu Dhabi's golden sand beaches along its island-littered coastline, to the luxury lengths of sand around Ajman and the more natural shores of the Emirate of Fujairah, you have plenty of choice for everyone in the United Arab Emirates. Numerous leisure hotels in Dubai and Abu Dhabi with plenty of water-sports options such as diving, jet-skiing, stand up paddleboarding, and snorkeling are also available at many resort locales.

It is one of the world's largest human-made islands and a triumph of human ingenuity. Locals and tourists alike congregate at The Palm's vast array of high-end hotel dining options.

Shopping is one of the principal attractions in the UAE. You will encounter boulder and elegant malls by the dozen; additionally, if you desire a more local approach to shop, you can look for the souks (market streets).
In the region of Deira is found the world-famous gold souk and rather more down-to-earth fish souk, but all of the Emirati cities have their souk areas to explore.

One of the best ways to experience Dubai is from one of the beautiful dhows (traditional Arabic Boats) that handle the creek. Sunset cruises (which often come with entertainment and dinner) are lovely as you watch the high-rises lights begin to shine in the nightfall.

You'll find a lot of things to do here, from four-wheel-drive trips and dune-buggy journeys to sandboarding, hiking, and camel treks. You can experience an excellent desert day trip for sightseeing in Dubai, Abu Dhabi, and Fujairah. Bedouin-style dinners are a quieter option if you want to feel the desert's empty beauty.

Stretching over 13,000sqm, City Walk offers European-style stroller streets adjacent to a host of shopping, entertainment, and food options perfect for a lovely day out.

You can immerse yourself between more than 50 million blooming flowers throughout the different exhibits—the world's most extensive natural flower garden. The 72,000sqm park has an impressive line-up of famous buildings and structures completely transformed into colorful flower displays.

The most remarkable museum dedicated to the arts in the Emirates (until the opening of the Louvre and Guggenheim in Abu Dhabi), the Sharjah Arts Museum is the house to the most distinct art collection in the United Arab Emirates. The museum is distinguished for its collection of works by Arabic artists and its essential pieces by European artists specializing in painting the Arab world. The museum offers temporary exhibitions program throughout the year. 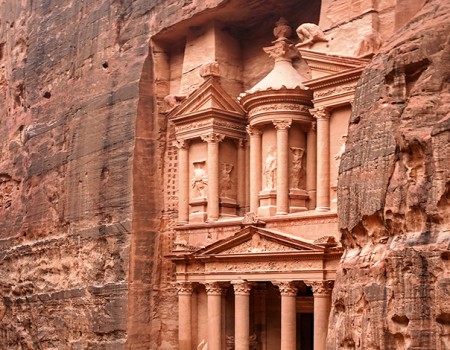 Wedged amidst so much upheaval is this friendly, modern, and relativel... 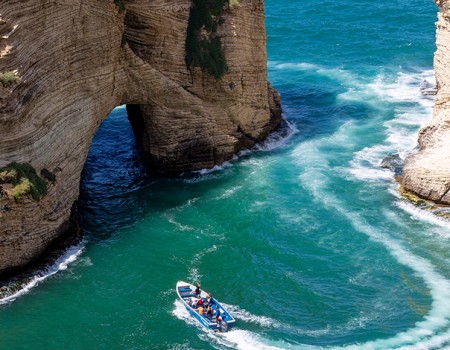